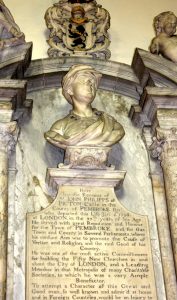 In the early eighteenth century, it was unusual for members of the aristocracy to be seen as committed Christians and to lend their support to evangelical projects and movements, but Sir John Philipps (c1666-1737), the 4th baronet, of Picton Castle was an exception.  His sister Margaret married the Rev. Griffith Jones, vicar of Llanddowror [see page for Carmarthenshire], while another sister, Elizabeth, married Sir John Shorter and became mother-in-law to the Prime Minister, Sir Robert Walpole.  Philipps served two periods as a member of Parliament, from 1695 to 1702 and again from 1718 to 1722.  All the while, he used his influence and money to support the recently founded Society for the Promotion of Christian Knowledge and Society for the Propagation of the Gospel.  In his final years, although completely blind, he heard of a young student at Oxford  leading the "Holy Club" and sent him financial support; it was George Whitefield.

Philipps was laid to rest in St Mary's Church (SA61 2DJ) and his impressive monument, just to the left of the altar, speaks of his support for the cause of vertue and the real good of his country.  It reminds us that, amongst other things, he promoted the building of 50 new churches in London as the population grew and moved out towards the east.  He also financed the building of the Old Bridge in this town, as recorded on a memorial stone nearby. 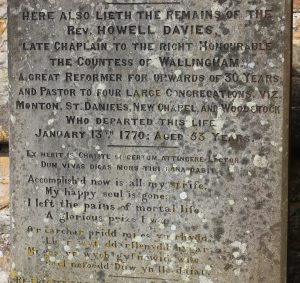 At St David's Church (SA61 2PJ) in the Prendergast region of the town, is the grave of Howell Davies (see Newchapel below).  Lying just to the right of the church door, it has inscriptions in Latin, Welsh and English.

A few miles outside the town is Picton Castle (SA62 4AS), ancestral home of the Philipps family, which is open to visitors and offers the usual choice of guided tours, souvenir shops and pleasant gardens.  The guide book refers to the 4th baronet as the Good Sir John and describes his involvement with evangelical causes as well as his role in parliament as a commissioner for the new churches in London.  In the main hall are family portraits, which include those of his sons Sir Erasmus and Sir John (5th an 6th baronets respectively), but apparently none of the good 4th baronet himself.  Other portraits shown are those of his niece Catherine Shorter and her husband Sir Robert Walpole, Prime minister and leading statesman of the time, neither of whom were noted for adherence to the Christian values of their uncle.

Not far from Newcastle Emlyn, but just across the boundary from Carmarthenshire, the village takes its name from the chapel built for the Rev. Howell Davies (1717-1770), known as the Apostle of Pembroke, to serve his followers in the north of the county.  His first chapel was at Woodstock near Haverfordwest. 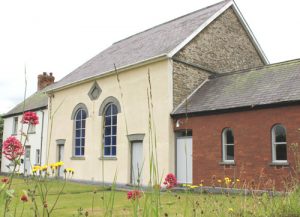 The Chapel (SA37 0EH) is set back from the road with a grassy space in front and cottages – one white, one brick – on either side.  The front of the chapel has two grey-painted doors and two long rounded windows.  A plaque set into the wall has a Welsh inscription and the date of construction - 1763.  The doors lead in on either side of the pulpit and inside are box-like pews and an all-round gallery.

Those who preached here read like a roll call of the main figures of the Methodist revival. They include George Whitefield and the Wesleys, visiting from England, as well as Howell Harris and Daniel Rowland.  Harris once preached to a crowd of two or three thousand from an open window.  A student from Carmarthen, Thomas Charles, walked thirty miles to hear Rowland preach and owed his conversion to that sermon.  We will meet him again at Bala, where, as a result of his meeting with the young Mari Jones, he became a significant figure in the founding of the British and Foreign Bible Society.