As with many towns in South Wales, planners have tried to improve traffic flow with large roundabouts and dual carriageways serving retail parks on the edge of town, leaving the pedestrianised town centre to sink or swim.

Approaching on the A484 from the east, the first main roundabout faces a traffic-free area called Island Place (SA15 1SG).  Here, side by side, are two large chapel buildings – Ysgoldy Sion, built in 1913 on the left, and Zion Baptist Chapel dating from 1857 on the right.  The former still functions as a Welsh-speaking church, while the latter has been converted into flats.

It was here that evangelist Stephen Jeffreys (1876-1943) had a vision which he always regarded as a miraculous moment in his ministry. The location has been described as the Island Place Mission or Gospel Hall, but the exact identity of the building is imprecise. While preaching in 1914, he saw on a wall of the chapel the face of Jesus as the man of sorrows with tears running down his face.  It was claimed that many in the congregation saw it too and that it lasted for some time.  He believed the outbreak of the First World War as few weeks later, with the blood of millions shed on the battlefields of France and Belgium, confirmed this prophetic experience.  Jeffreys remained in Llanelli as pastor of the chapel for seven years, but in the years between the wars spent much time on preaching missions to Scandinavia, and also to the United States, Australia, New Zealand and South Africa, sometimes accompanied by his brother and fellow evangelist George Jeffreys. 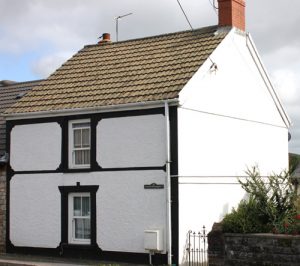 This village was the birthplace of evangelist, prayer warrior and Bible College principal Rees Howells (1879-1950). The family home was 26 Llandeilo Road (SA18 1BA), a little white-painted cottage, with the window frames and edges of the building picked out in black, a familiar feature in Wales.

Like several of his brothers, young Rees began his working life at a local tin mill, but as a boy and in spare moments he would have enjoyed the freedom of the magnificent Brecon Beacons (now a National Park) which begin just a few hundred yards from the village.  In his childhood and youth he attended the ochre-coloured Gibeah chapel on the sharp bend in the main road, close to the junction with Llandeilo Road.  We meet Howells again at Swansea on the Glamorgan page. 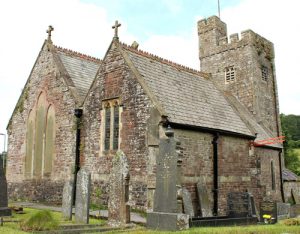 The village use to sit directly on the busy A477, but has now been bypassed, making life easier – and quieter - for residents and visitors alike. The most famous former resident was the Rev. Griffith Jones (1684-1761), vicar of St Teilo's church (SA33 4HH) from 1716 until his death forty-five years later.

Born at the hamlet of Penboyr, Jones was the son of a farmer and as a boy he was sent to tend the flock.  Praying in the corner of a field one day, he had a vision of the Lord Jesus, who said to him My boy, I want you to be a witness for me in the world.  Educated at Carmarthen Grammar School, he was ordained in 1708.  He was a prominent member of the Society for the Promotion of Christian Knowledge and in 1731 began to promote “circulating” schools to teach people to read, so called because they were held in a certain place for about three months before moving on to a new location.  It was estimated that over 200,000 people learned to read in this way and the main material he used was the Bible and the Catechism of the Church of England, thus laying the foundation for the labours of later evangelists.

Jones was a powerful preacher and practised open-air preaching in the style of later Methodist preachers, whose work he warmly supported.  It was an encounter with Jones that led to the conversion of Daniel Rowland, a story we tell at Llandewi Brefi on the page for  Cardiganshire

When he died, Jones was laid to rest within the church he had served for so long, where his tomb can be seen.  A memorial tablet gives a long description of his life and work. Unfortunately, St Teilo's, a small neat church with a square tower and stair turret, is not normally open outside service times, but a noticeboard records that Jones was invited to the parish by Sir John Phillips of Picton Castle, whose sister he subsequently married, and that his work was generously supported by Madam Bridget Bevan of Laugharne. 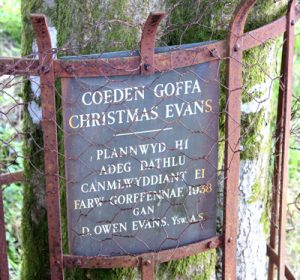 Christmas Evans (1766-1838), known as the one-eyed preacher, was born at Ysgaerwen, near the hamlet of Tregroes, about two miles north of Llandysul. You reach it up a narrow road turning off the A475 at some prominent farm buildings. The house has gone but the site is marked by an ash tree and on the railings round it is a plaque with an inscription in Welsh. It can be seen alongside a stone bridge, a short distance beyond St Fraid's church (SA44 4NN).  The plaque was put up in 1938, marking the hundredth anniversary of Evans' death

Born into stark poverty, Evans was sent away at the age of nine to live with an uncle who farmed at Llanfihangel-ar-Arth nearby.  This man treated him harshly and Evans later recalled it would be difficult to find a more unconscionable a man in the whole course of a wicked world.

In the course of his ministry, Evans spent time in Anglesey, Caerphilly, Cardiff and Caernarvon.  He died while on a preaching visit to Swansea, where further details of his life are given. 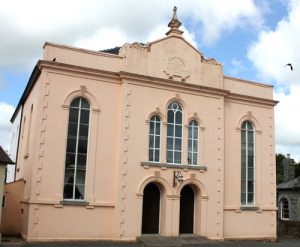 This town played a significant role in the lives of two men, who, in quite different ways, exercised great influence on spiritual movements of the twentieth century.  In astronomical terms, Evan Roberts (1878-1951) was a meteor that blazed across the sky for a few months and then burned out leaving the fires of revival in its wake;  Martyn Lloyd Jones (1899-1981) was the fixed star, shedding light and wisdom over several decades in his ministry at Westminster Chapel, London, as he rescued evangelical scholarship through deep expository preaching, and rediscovered the Reformed doctrines of the Puritans.

Roberts came here in 1903 to begin preparatory studies for training as a minister, but did not stay long.  He lived at a house called Ty Llwyn in Ebenezer Street, sharing with his friend and fellow student Sydney Evans.  The double-fronted house lies immediately to the left of the cul-de-sac beside Ebenezer Chapel, but today looks unloved and in need of restoration. 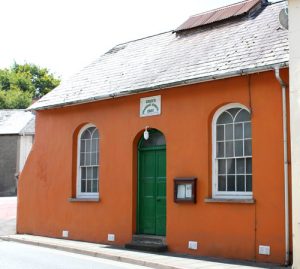 The two young men attended the Grammar School, close by in Water Street (SA38 9BH), and worshipped at the peach coloured  Bethel Chapel in Church Lane (SA38 9AA).  Today the former Grammar School serves as a small community hall, available for hire.  Brightly painted in terracotta with an equally bright green door, it forms a significant feature.  When Roberts came here, it provided an educational foundation for those intending to train at the Welsh Presbyterian College at Trevecca.  In 1904 he went with other students to hear Seth Joshua speak at Blaenannerch about a revival already in progress at a church in New Quay on the coast.  Within weeks Roberts had taken the flame of revival back to his home church at Loughor, whence it spread to the rest of Wales and many places beyond. 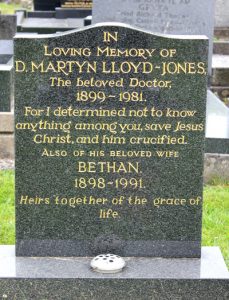 Martyn Lloyd Jones loved all things Welsh, none more so than the Carmarthenshire countryside around Newcastle Emlyn.  His wife Bethan Phillips came from the town and he himself was brought up at Llangeitho not far away.  He would return at every opportunity to relax and visit relatives, and at the end chose to be buried here also.  His grave is at the Gelli cemetery (SA38 9RA) on the A484 Cardigan road, about half a mile out of the town.  It has a headstone of black Welsh granite and the inscription refers to The beloved doctor and carries the text I determined to know nothing among you save Jesus Christ and him crucified.  When Bethan was laid to rest here ten years later, the further text was added Heirs together of the grace of life. 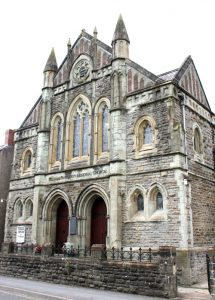 Lying in a beautiful valley near the confluence of two rivers, and on main roads between Brecon, Carmarthen and Builth Wells, the town is popular with tourists and boasts one of the oldest pubs in Wales, the King's Head in the Market Square.

The name of William Williams (1717-1791), known as Williams Pantycelyn will always be associated with the area and he is remembered as the greatest Welsh writer and poet of the eighteenth century.  His published works, principally in Welsh, included many volumes of prose, poetry and hymn collections.  Not all his hymns translated well into English, but by far the best known is Guide me O thou great Jehovah, Pilgrim through this barren land - heard not just in churches but at Rugby matches and other expressions of Welsh national identity.

The son of a farmer, Williams was born at Cefncoed  in the parish of Llanfair-ar-y-Bryn, a few miles north of Llandovery.  Intending to become  a doctor, he moved to Talgarth for training and at the age of twenty heard a sermon by Howell Harris, which changed the course of his life.   Ordained in the Church of England in 1740, he became curate to Welsh historian Rev. Theophilus Evans in Llanwrtyd .  However, Evans' opposition to his preaching style led Williams to leave the Anglican church and he joined Harris and Daniel Rowland as one of the three leading figures in Welsh Calvinistic Methodism.

Williams lived with his wife Mari and their eight children at Pantycelyn Farm (SA20 0RN), his mother's former home, and the name is often appended to his as a title.  It lies some three miles east of Llandovery on the road to Brecon and is still owned by Williams' descendants.  To find it take a left turn signposted to Babel and Pentre Ty Gwyn. Just through the Pentre Ty Gwyn is a sign telling the Williams story and the farm lies down a steep and very narrow lane. 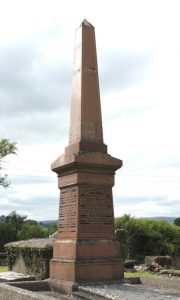 As well as being a powerful preacher, Williams' medical interests were not wasted.  He pioneered fellowship meetings or “soul clinics”, where people's religious experiences could be analysed and discussed, which often helped to restore their mental health, in the manner of counselling sessions today.  Some 450 of these fellowship were established and in his preaching and pastoral work, Williams calculated that he had travelled nearly 120,000 miles on horseback in his lifetime.

When he died, Williams was laid to rest in the graveyard of St Mary's church (SA20 0YF).  Leaving Llandovery on the A483 to the north, we reach it by a very sharp left turn at the crest of the hill.  The spot is marked by a prominent memorial obelisk in pink granite.  It carries his epitaph in typically poetic language:  He waits here for the coming of the morning star, which shall usher in the glories of the first resurrection, when at the sound of the archangel trumpet, the sleeping dust shall be reanimated and death for ever shall be swallowed up in victory.

In the High Street near the centre of the town is the Williams Pantycelyn Memorial Church (SA20 0PU), solidly built of stone in the late Victorian style.  It has the large double front doors characteristic of many Welsh churches. There is a slate memorial plaque on the front with an inscription in Welsh.  Although closed for a time, it has recently been reopened for services.