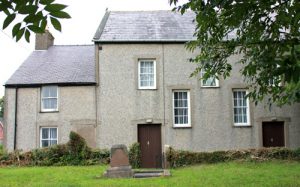 From 1792 to 1826, the one-eyed Welsh evangelist Christmas Evans (1766-1838) served the Baptist churches of Anglesey, living on a stipend of £17 a year, supplemented by the selling of tracts.  He was based in Llangefni, where the church and adjacent cottage where he lived still stand.

The pebble-dashed Capel Cildwrn lies about half a mile from the centre of the town, on Cildwrn Road towards Boddfordd.  Looking run down and in need of redecoration, it still appears to be in use as a chapel.  Two enormous ash trees overhang the graveyard and a slate plaque on the wall records its link with Christmas Evans.

Evans is also remembered at the late 19th century Penuel Chapel in Ffordd Glandwr, where his name is inscribed on the front.

Contemporary with Evans was the Calvinistic Methodist preacher John Elias (1774-1841), who also spent most of his life on Anglesey.  Born near Abererch on the Lleyn Peninsula, Elias had little formal education, but was taught to read in both Welsh and English by his grandfather.  He trained as a weaver, but from the age of 20 was recognised as a Methodist preacher - part of the second generation, after pioneers like Howell Harris, Daniel Rowland and William Williams had passed away.  He moved to the island in 1799 and from 1830 was based in Llangefni.

Both in the pulpit and in the open air, Elias had a commanding presence and his preaching was described as if taking fire down from heaven.  The large and impressive Moriah Chapel in Glanhwfa Road (LL77 7WY) with its ornate frontage was built in 1897.  It is also known as the John Elias Memorial Chapel with his name inscribed on the pediment. 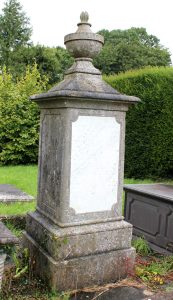 John Elias is buried in the churchyard at St Catherine's church at Llanfaes just outside Beaumaris (LL58 8LL).  There is an impressive memorial stone, with a lengthy epitaph in both English and Welsh, but the English side is more covered by moss and lichen, making it harder to read.