What is it that brings coach parties of Koreans to a small chapel here about three miles south of Abergavenny?   Approaching on the A4042 from the south, a lane to the right just as we enter the village leads to Hanover Chapel (NP7 9HD) built from local stone in 1839, although the church community dates back 350 years.  The neighbouring manse is considerably older than the chapel itself. 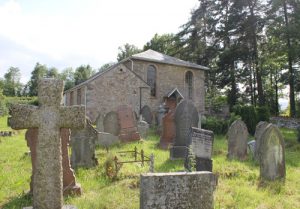 Facing the chapel is a prominent memorial to the Rev. Robert Thomas (1810-1884), who for 37 years proclaimed the gospel in the adjoining sanctuary, and his wife.  The Korean interest, however, relates to their son, Robert Jermaine Thomas (1839-1866), who became one of the first Protestant missionaries to that country.

Educated at Llandovery College and later at New College, London, the younger Thomas sailed for Shanghai in 1863 at the age of 24, accompanied by his new wife Caroline.  Tragically, she died of a miscarriage a few months later.  He first visited Korea in 1865, distributing tracts & scriptures in Chinese, as there was nothing available in the Korean language.  (The only previous Protestant missionary to that country was the German Karl Gutzlaff in 1832).  The following year Thomas joined the American trading ship General Sherman as an interpreter.  Displaying the arrogance for which western trading powers were notorious in the East, the crew ignored orders from Korean officials and sailed up the Taedong River towards Pyongyang, with a cargo of cotton goods, tin and glass.  In the course of a disastrous journey the crew opened fire on civilians, killing and injuring several, and kidnapped Korean officials who had been sent to negotiate.  Eventually the ship ran aground and was set on fire, all the crew being shot, burned or beaten to death.  Thomas had been scattering tracts on the riverbank during the journey and, as he died, gave out what remained of his stock of Bibles.

By modern standards, this was scarcely a textbook example of a sensitive or well planned missionary endeavour, but there was an extraordinary outcome.  Although details of the story vary, it seems that one official (and maybe others) gathered up Thomas’s Bibles and recognising the quality of the paper, used them to paper the walls of his house. This attracted the attention of visitors, who read the pages and eventually formed the nucleus of a young Korean church. 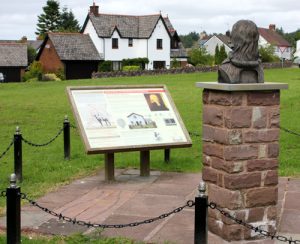 The village lies a few miles north of Chepstow and on the triangular village green (NP16 6PE), surrounded by slate-roofed cottages, is a bust of John Wesley mounted on a column carrying the words Wisdom, Righteousness, Sanctification, Redemption, taken from his diary of the period. The founder of the Methodists made his first visit to Wales in October 1739, and this is where he preached his first sermon.

A display board gives an account of the visit, describing the route he took and tells us one of his first converts was a local girl called Ann Lewis.  Later, as Ann Rosser, she and her husband started the first Methodist society in Wales and were part of the community that built the first Methodist chapel, which can be seen in the nearby village of Earlswood. In subsequent years, Wesley made a total of 35 visits to Wales.