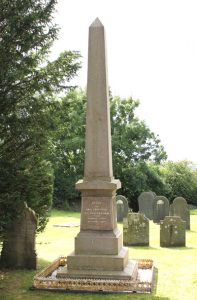 This village, deep in beautiful Welsh countryside, was the birthplace of Ann Griffiths (1776-1805), celebrated as one of the best Welsh hymn writers.  She was the daughter of John Thomas who lived at Dolwar Fechan farm, two miles south of Llanfihangel and a mile north of Dolanog and was brought up in the Anglican church where her father was a churchwarden.  Despite Bible readings and family prayers, it wasn't until the age of 18 that she came to a knowledge of personal salvation and followed her two brothers into the Methodists after hearing the preaching of Rev. Benjamin Jones.  After the death of her parents, she married Thomas Griffiths, a local farmer, but died from complications following the birth of her first child.

Ann lies buried in the churchyard of St Michael and all Angels (SY22 5JD), which she would have attended regularly in her youth.  The grave is marked by a tall granite obelisk, with the epitaph in English and Welsh.  Just outside the churchyard, by the war memorial, is a bronze sculpture in the form a book. This was erected to mark the 200th anniversary of her death, and describes the route of the 7-mile Ann Griffiths Walk than can be followed between Llanfihangel and Dolanog using many of the paths that Ann would have known. To convey the rural ambience, the book even has leaves (also in bronze) which appear to have fallen on the pages!

Ann left a collection of hymns and poems which were published by the Calvinistic Methodists.  Although sung regularly in Welsh, her hymns unfortunately seldom appear in English collections.  However, the enthronement of Rowan Williams as Archbishop of Canterbury in 2003 included his own translation of one of her hymns Yr Arglwydd Iesu (The Lord Jesus)

The Ann Griffiths Memorial Chapel (SY21 0LQ), erected here in 1904, cannot be said to have any great beauty or architectural merit.  Inside there are plain wooden benches facing the front. The roof timbers are supported by four stone bosses, on one of which is the carved effigy of Ann Griffiths.  The others depict other local ministers.  Outside, there is also another “book” sculpture, showing the route of the Ann Griffiths Walk; these may also be placed at other points along the way.