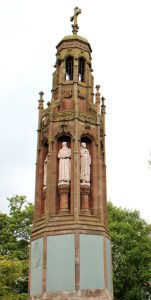 Lying on the border of the historic counties of Denbighshire and Flintshire, it might be simpler to put St Asaph into the modern county of Clwyd, which combines the two.

With a population barely larger than an average village, it achieved City status in the Queen's Diamond Jubilee celebrations of 2012.  Though small by comparison with other historic cathedrals, St Asaph's Cathedral (LL17 0RD) dominates the city and gives it a status out of all proportion to its size. Mainly built of yellowish grey Welsh sandstone it has been patched up in places with a redder version, especially around the top of the tower.

Standing in front on the north side is the octagonal Translators Memorial to churchmen associated with the translation of the Bible into Welsh, with a small statue set into a niche on each face. Prominent among them is William Morgan (1545-1604), who produced the 1588 translation of the whole Bible. He spent his final years here year as bishop and is buried beneath the high altar.  He is shown with bishop's mitre and holding his precious translation. William Salesbury (c1520-1584), whose New Testament translation was published in 1567 is also featured.  The memorial was erected in 1888 to commemorate the 300th anniversary of the Morgan Bible.

Inside the cathedral, there seems to be no memorial to Morgan, but a display case of Bibles has a copy of his 1588 translation, of which only 20 are still in existence. 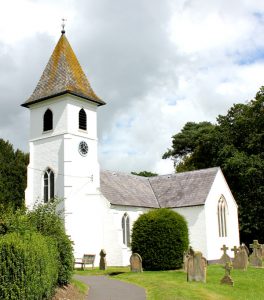 Memories of the puritan scholar and preacher Philip Henry (1631-1696) and his son the famous Bible commentator Matthew Henry (1662-1714) straddle the border between England and Wales.  Henry senior was appointed private tutor to a wealthy family, and preacher at Worthenbury in Denbighshire, but was ejected from his pulpit following the Act of Uniformity in 1662.  He moved to Broad Oak, near Whitewell, living in a property owned by his wife.  The house behind the Broad Oak Farm business park (SY13 3AQ) is on the site of his former home and this was the birthplace of his son Matthew, who was baptized in St Mary's church nearby (SY13 3AN), where the family worshipped.  This small church is unusual in style and even more unusual in being completely white on the outside.

There is a memorial to Philip Henry in St Alkmund's church, Whitchurch, just across the English border.