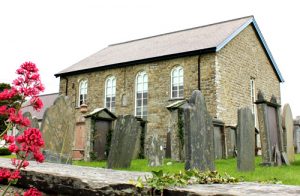 The Calvinistic Methodist Chapel (SA43 1SJ) stands on its own to the left of the main road as you travel north from Cardigan.  It was here that Evan Roberts, his friend Sidney Evans came from Newcastle Emlyn in 1904 to hear Seth Joshua speak of a revival taking place at New Quay on the coast nearby.  While seated in a pew that is still pointed out, Roberts prayed the prayer Bend me, Bend me! in response to Joshua's fervent pleading, and within weeks, revival had broken out in Roberts' home village of Loughor, from where it spread throughout Wales and beyond.

Standing on open ground about a mile from the sea, the front of the chapel presents a pleasing symmetry.  There are two rounded doors and four windows – two long, spanning both floors, and two short, serving just the gallery.  On the wall an inscription in Welsh gives significant dates in the building or extension of the chapel.  Centrally in front is white stone memorial to John Jones, a former minister. 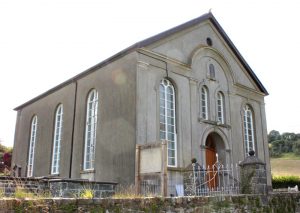 Those who like to find obscure places with inspiring stories could do no better than visit the Chapel in this hamlet, just off the A482, close to Aberaeron (SA48 7RF).  Still open for worship, the chapel is remembered for the ministry of Dr Thomas Phillips from 1796 to 1842. It was in 1810 that Phillips had the vision to start an academy for missionaries, using a simple farm building, with many of the candidates drawn from his own congregation.  Over a period of 30 years, some 200 students were trained for ministry, many of them as missionaries.  They were sent to all parts of the world, but Phillips felt a particular burden for the island of Madagascar. 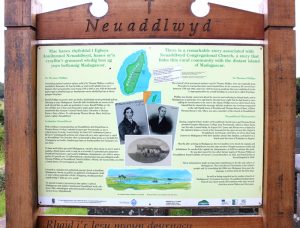 The first Madagascan party consisted of David Jones (1797-1841) and Thomas Bevan (1796-1818), each with a wife and small baby, who departed in 1817.  Within 3 months of arrival, Bevan, both wives and both children had succumbed to malaria leaving Jones, aged just 21, as the sole survivor.  He was later joined by others, in particular David Griffiths (1792-1863) and David Johns (1794-1843).  Between them, they had to reduce the Malagasy language to writing (previously just an oral tongue), before translating the New Testament and other scriptures.  In due course, they preached the gospel, established churches, instructed believers and founded many schools.

At first the missionaries received the support of King Radama I, but on his death in 1828, the succeeding queen was hostile and by 1835 all missionaries had to leave, while local believers suffered severe persecution.  David Jones based himself on the island of Mauritius, dying of malaria in 1841, which he had survived in the early months of the mission.  When missionaries returned in 1867, expecting the church to have declined in their absence, they found by contrast that it had shown remarkable growth under local leadership. 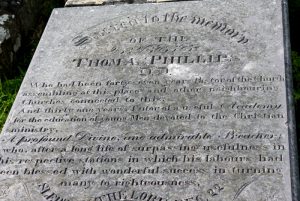 In the graveyard, close to the chapel wall is the tomb of Thomas Phillips. It is covered by a slate gravestone, with an epitaph worthy of his great achievements (A profound divine, an admirable preacher...…..).  In front of the chapel is a monument to the Madagascar missionaries with a Welsh inscription, while a display board tells their story in two languages.  Like most Welsh chapels, this one is normally kept locked, but was fortunately open for redecoration when we called.  On scanning the visitors book, it was moving to see many recent entries by parties of Madagascan Christians, paying warm tribute to the labours of pioneers from Neuaddlwyd 200 years earlier. 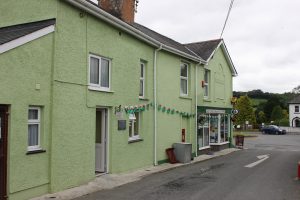 At the centre of the village, a square grass area forms a traffic roundabout, but also serves as a small village green, surrounded by shops and cottages.  One of these buildings, painted vivid green and known as The Albion was, from 1900 to 1914, the boyhood home of Martyn Lloyd Jones, whose father had moved the family here from Cardiff, hoping to make a living with a dairy and grocery business.  Martyn grew up enjoying the beauties of the Welsh countryside and travelling daily to school in Tregaron, about four miles away. While here, he would certainly have imbibed some knowledge of the life and teaching of Llangeitho's most famous son, Daniel Rowland (1713-1790). 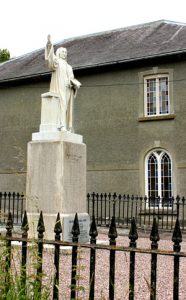 Son of the rector of Llangeitho, Rowland was born in the parish of Nantcwnlle nearby. He followed his father into the Church of England ministry and walked 200 miles to London for his ordination in 1733. However, he had no experience of personal salvation until he went to hear the Griffith Jones preach at Llanddewi Brefi.  The sermon made little impact, but a passing remark after the service led to his conversion.  Along with his fellow Calvinistic Methodists, Howell Harris, William Williams and Howell Davies, Rowland became one of the leaders of the Welsh evangelical revival, preaching to large crowds often in the open air.  Spanning fifty-five years, his ministry was almost exactly contemporary with John Wesley.

The Anglican church did not approve of his new style of preaching.  His elder brother John had succeeded his father as rector and for twenty-seven years Daniel served as his curate, but often went to preach in neighbouring parishes or in barns.  On John's death in 1760, the bishop passed over Daniel as rector, but awarded the living to his son, also called John.  For a while, Daniel was therefore curate to his own son, but eventually his licence to preach was withdrawn and he began to use a Methodist Chapel. Unlike other Methodist preachers, Rowland did little itineration, basing his ministry in and around Llangeitho.

Rowland's statue, sculpted by Edward Griffith in 1883, stands near the centre of the village, on the site of a chapel built for him in 1764.  He has one hand raised in preaching, while the other holds an open Bible.  The adjacent Gwynfil Chapel (SY25 6TW), with grey pebble-dashed walls and windows with attractive coloured glass was built in the nineteenth century.  Noticeboards in the village give helpful information on Rowland's life and ministry. 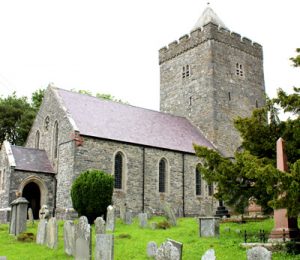 St David's Church (Eglwys Dewi Sant) stands prominently above the village (SY25 6PE) and can be visited with a key obtainable from the village shop.  A display inside recounts its connection with the Welsh Calvinistic Methodists and, in particular, remembers the remarkable conversion of Daniel Rowland (1713-1790) in 1735.

Rowland had been ordained in the Church of England and was serving as curate to his brother John in Langeitho.  In a remarkable parallel with the experience of John Wesley in England, Rowland, despite his ecclesiastical background, as yet had no knowledge of personal salvation.  It came about following a sermon by Griffith Jones, vicar of Llandowror in Carmarthenshire -  a fervent preacher and pioneer of Welsh education. Noticing Rowland's  indifference to the message, Jones pointed directly to him and exclaimed Oh for a word to reach your heart, young man.  This remark changed the course of his life.

In the manner of Wesley, his heart was warmed and he adopted the fervent preaching style of the Methodists. This happened three years before Wesley's conversion at Aldersgate Street in London and Welsh Calvinistic Methodism was a separate, but parallel, movement from the evangelical awakening in England under Whitefield and the Wesleys.  As with English Methodism, the movement began within the Anglican church, but in the early nineteenth century it separated to become the Welsh Presbyterian church.  From his base in Llangeitho, Rowland preached to large numbers in church or in the open air for the next fifty-five years.

Approaching the town on the A44, St Padarn's Church stands prominently just to the right, the locality known as Llanbadarn Fawr (SY23 3QZ).  The Welsh Bible translator William Morgan (1545-1604) came here as vicar from 1572 to 1575, his first clerical appointment, but may have spent much of the time at Cambridge University, studying for his Bachelor of Divinity.

In the south transept, there is a small chapel, with displays explaining the history of the church.  It includes panels giving details of Morgan's life and has a facsimile of his Welsh Bible, first published in 1588.