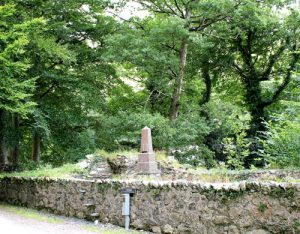 A young Welsh girl, barely more than child, saves up her money for six years, then walks 26 miles though a remote valley to buy a Bible from the local minister, only to find all his Bibles have been allocated to others.  It could be the tear-jerking start to a romantic Victorian novel, but the story is true and it's not stretching hyperbole to suggest that - in a roundabout way - it changed the history of the world.

Mari Jones (1784-1864) was born into a poor family in this tiny hamlet, at the end of very narrow lanes off the B4405 not far from from Machynlleth (not to be confused with a place of the same name in Caernarvonshire). Losing her father at the age of five, she would walk three miles each way to attend a school started by local Methodists in Abergynolwyn.  Having learned to read, she began to save up to buy a Bible in Welsh and by the age of 15 had amassed a total of 17 shillings.

The church at Llanfihangel is small and barn-like, but despite its remote position it attracts a steady stream of visitors wanting to follow up the story of Mari Jones. There is a small exhibition in the vestry. The site of the family home lies a few hundred yards beyond the church.  It was called Tyn-y-Ddol (LL36 9TU) and today there is a memorial obelisk, surrounded by a stone wall to mark the location. Those most eager to enter into the spirit of the story often repeat the walk, starting from here. They can be guaranteed idyllic scenery for their journey, but not necessarily idyllic weather!

The famous walk took place in 1800.  It was a route done regularly by others in the area, including Mari's own father, who would walk to Bala on a Saturday evening, staying overnight to hear the Methodist preachers in the market place on Sunday and then walk home.  Mari's mother put some bread and cheese in a bag, and also her clogs, suggesting that much of the walk was done barefoot. The clogs would be needed for meeting the minister.

Situated on the shores of Llyn Tegid (better known to tourists as Lake Bala), the town is best known for the life and ministry of the Rev. Thomas Charles (1755-1814).  Born at Abercywyn, near St Clears in Carmarthenshire, Charles was converted under the ministry of Daniel Rowland at Newchapel in 1773.  He studied for the Anglican ministry at Llandowror and then at Oxford University. 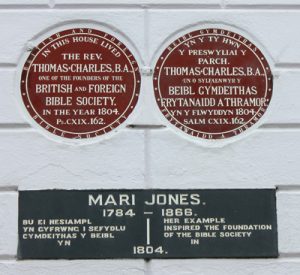 After ordination, Charles served at various parishes in Somerset and Shropshire, but found himself increasingly unpopular in the Church of England owing to his methodist style of preaching.  Returning to Wales, in 1783 he married Sarah Jones, stepdaughter of a Methodist preacher in Bala, a beautiful and accomplished woman who kept a local shop. She was a great support to him both spiritually and financially. The following year he left the Anglicans and joined the Methodists.  Charles and his family lived in a prominent white-fronted house in the High Street (LL23 7ND), now serving as a branch of Barclays Bank.  Twin brown plaques in English and Welsh record his residence. Just below, another plaque remembers Mari Jones (1784-1864), whose search for a Bible in her own language inspired the foundation of the British and Foreign Bible Society.

At the north end of Bala is the Green, a large open space, which now provides a car park and children's playground.  At one end is an ancient stone circle, like a miniature Stonehenge, with a flat stone in the centre providing an open-air pulpit. It was here that Methodist preachers, including Thomas Charles and John Elias would address crowds of thousands on Sundays.  Villages would come in from outlying farms and hamlets to listen. 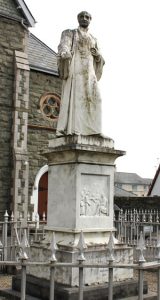 During his ministry in Bala, Charles, as well as being a powerful preacher, was an energetic and gifted organiser.  He revived the circulating schools, pioneered by Griffith Jones, established Sunday Schools and published devotional books, including a Bible dictionary. There is a statue of him at Capel Tegid in Heol Tegid, just off the High Street.  It has a marble relief of a him presenting a Bible to a young lady, presumably the footsore Mari Jones.

It was in 1800, that the fifteen-year-old Mari, having learned to read in one of the circulating schools, walked 26 miles from her home near the foot of Cader Idris – barefoot by most accounts – to ask for a Bible in Welsh, only to be told that the only Bibles available were already allocated. However, Charles did not send her away, but asked her to stay for a few days until another consignment arrived.  So Mari got her Bible and was given two more copies for members of her family. Two years later, in 1802, Charles related the story to fellow members of the Religious Tract Society on London.  Another member, Rev. Joseph Hughes, then posed the question If for Wales, why not for the kingdom, and if for the kingdom, why not for the whole world?  In 1804, this led in turn to the foundation of The British and Foreign Bible Society, under the auspices of the Clapham sect, with William Wilberforce as a prominent supporter.

Other Bible societies followed in America and Europe and these gave great support to the Protestant missionary expansion in the nineteenth century and also promoted the translation of the Bible into other languages, a movement which continues to this day.  For much of the twentieth century, the Bible was forbidden in many countries, especially those under communist rule, but Bible smuggling enabled the the church to grow and flourish in Eastern Europe and China, despite restrictions and persecution. 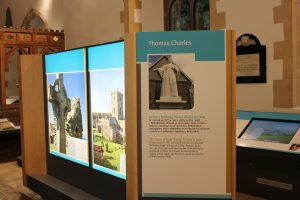 About half a mile south of Bala, on the western shore of the lake, is the church of St Bueno's, Llanycil, now decommissioned for services.  Here are the graves of Thomas Charles and others of his family in a plot surrounded by cast iron railings, close to the north end of the church.  His epitaph, on a slate plaque, records his role in the foundation of the Bible society.  It can be read through the railings with some difficulty.

Appropriately, the church has now been converted into an exhibition called Mary Jones World (Byd Mary Jones) LL23 7YF, first opened in 2014.  There is a video representation of her journey, information about the history of the Welsh Bible, and illustrations of how the Bible is being presented in modern cultural contexts.  There is also a facsimile copy of her actual Bible.  The original, which she kept by her bedside until she died, is in a library in Cambridge. 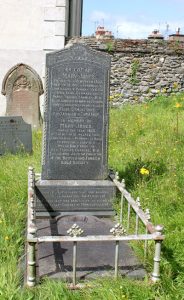 Mari Jones was born poor, lived poor and died poor.  In 1813, she married Thomas Jones, a weaver, and lived most of her life here, a few miles from her birthplace, in a house that can still be seen. The couple had six children, five of whom died in infancy or in their teens.  The only survivor, John, emigrated to America in the 1840s.  Thomas died in 1849.  On her death in 1864,  Mari was buried at Bethlehem Chapel (LL36 9PR).  The graveyard is left wild, rich with flowers in summer, but a steady stream of visitors trample the grass to make a path to her gravestone, with its epitaph in Welsh and English, keeping her memory alive.