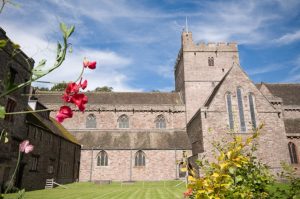 Brecon Cathedral welcomes visitors and, with is associated Heritage Centre, is a popular destination for those exploring the spiritual life of Wales. The town was the birthplace of Thomas Coke (1747-1814), who was ordained into the Anglican church and served as a curate at South Petherton in Somerset. However, his adoption of 'methodist' views and preaching style did not find favour with his vicar, so he left to join John Wesley's growing movement.  Indeed, it was Wesley's ordination of Coke as the leader and bishop of Methodism in America, that caused the eventual separation of the two churches. Coke made several visits to America and the West Indies and was on his way to develop missionary work in India when he died.

In the cathedral, there is a large slate memorial tablet to Coke on the wall just by the entrance to St Keyne's Chapel. It gives a long and fulsome biographical tribute but is set above eye level and the angle of the light does not allow for easy reading.

Coke's birthplace was a house in the High Street (LD3 7AP), immediately opposite the Guildhall, which was presumably the premises of his father, a well-to-do apothecary.   At the time of our visit, a convenience store occupied the ground floor, while the upper floors, where a small plaque can be seen on the wall, looked unoccupied and in need of repair.  At St Mary's church nearby, where Coke was baptised, there is a memorial stone on the outside, giving a brief summary of his career. 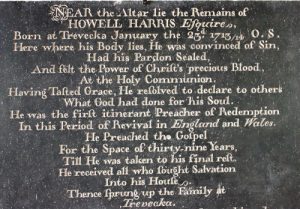 In this neat, compact town, on a branch of the river Wye, Howell Harris (1714-1773), one of the leading figures of Welsh Calvinistic Methodism, was born, came to faith, lived and died.  In 1735, he was converted through hearing a sermon by the Rev. Pryce Davies in St Gwendoline's church and began to hold meetings in his own home.  Soon he was preaching in the surrounding area, and before long in many other parts of Wales.  The poet and hymnwriter William Williams Pantycelyn was converted after hearing Harris preach from a tombstone in the churchyard in 1740.

Intending to enter the Anglican ministry, Harris studied for a term at Oxford, but was refused ordination on account of his methodist tendencies.  Despite this, he remained faithful as a layman to the Church of England throughout his life.  He came under the influence of George Whitefield and also formed a close friendship with Daniel Rowland.  Unlike Rowland, however, he travelled widely in Wales and made many visits to London to preach to Welsh-speaking congregations.  For a period, Harris embraced Moravian teaching on the death of Christ and these doctrinal differences caused a breach with Rowland, but the two men were later reconciled.  In later life and suffering ill health, Harris acquired a house and estate at Trefecca, two miles south of Talgarth, where he founded a religious community.

St Gwendoline's church (LD3 0UU), perched high above the town, is normally open to visitors and is proud of its connection with Howell Harris.  He is buried near the altar and a slate memorial set into the south wall provides a full and worthy epitaph. Part of it reads:  Here where his body lies, he was convinced of sin, had his pardon sealed and felt the power of Christ's precious blood at the Holy Communion.  Having tasted grace he resolved to declare what God had done for his soul. 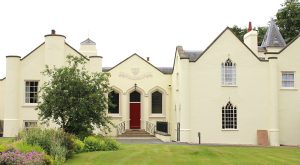 It was here from 1752, that Howell Harris, having acquired a house and estate, lived in a community of about 120 persons, who gave up their possessions and had all things in common after the manner of some early Christian communities.  They practised various arts and crafts and joined together for worship several times a day.  The community was known as Teulu Trefecca (Trefecca Family).  The building was designed by Harris in the then fashionable Strawberry Hill gothic style and built by the family members.

During this time, Harris was in correspondence with Selina, Countess of Huntingdon (1707- 1791), who had become a leader among evangelicals of the Calvinistic persuasion in England. She used her position to appoint zealous methodist ministers as her chaplains, allowing them opportunities to preach which they may have been denied in churches.  She also built private chapels in fashionable spa towns like Bath, Brighton and Tunbridge Wells, where her aristocratic friends could be invited to hear the gospel.  In 1767, she heard of six men, who had been expelled from St Edmund's Hall in Oxford for their evangelical opinions and, on the advice of Harris, she leased a property in Trefecca to serve as a training college for the ministry.  This was opened by George Whitefield in August 1768.  Lady Huntingdon spent much time here, but after her death 1791, the seminary moved to Cheshunt in Hertfordshire.

Howell Harris died in 1773, but Teulu Trefecca continued for some years with the descendants of the original community, but in 1838, the property was sold to the Welsh Calvinistic Methodist Church. It was opened as as theological college for the South Wales association in 1842.  The first principal was the Rev. David Charles, grandson of the well-known Thomas Charles of Bala. 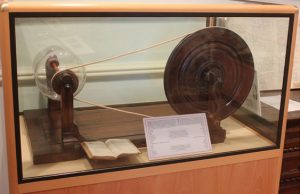 Today Coleg Trefecca is the lay training and conference centre for the Welsh Presbyterian Church.  The complex includes the original buildings of Howell Harris's community, together with modern annexes and extensions.  The front facade has the motto Initium Sapientiae Timor Domini (The fear of the Lord is the beginning of wisdom).  Inside, there is a small museum of artefacts and memorabilia relating to Harris and his community. Among the exhibits is a large mechanical clock, the size of a typical church clock, built by the members, and an electrical machine used at the time for medical purposes and believed, improbably, to be effective in the treatment of a wide variety of conditions. 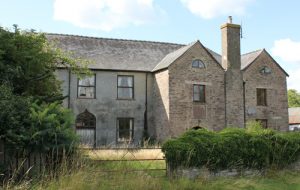 Guns belonging to Harris in his role as a captain in the militia (though never used in anger), and a telescope belonging to Harris's brother Joseph, are also on display. The museum is normally open to the public, but because of the college's other roles it recommended that visitors check in advance.

Lady Huntingdon's former college, a few hundred yards away towards Talgarth on the opposite side of the road, is now called College Farm.  It can be seen from the road, but is privately owned and not accessible to the public.

In the twentieth century, the town reinvented itself as the secondhand bookshop capital of Britain, and this, together with an annual literary festival, has produced a thriving industry of shops, hotels and guest houses  to serve the needs of national and international bibliophiles. 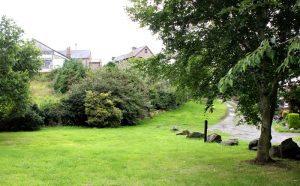 We come in search of one of the few actual martyrs of the eighteenth century evangelical revival.  William Seward (1702-1740) was a preacher and early supporter of George Whitefield, joining him on one of his visits to America.  However, he never seemed to master the art of handling the unruly mobs who sought to disrupt open-air preaching.  After an attack in Caerleon, which left him almost blinded, a month later he joined Howell Harris to preach at Black Lion Green in Hay.  A large stone thrown by one of the crowd struck him on the head, causing fatal injuries.

Black Lion Green (HR3 5AD) is a two-acre patch of grass beside the river, down a steep lane to the right of the Old Black Lion pub in Lion Street 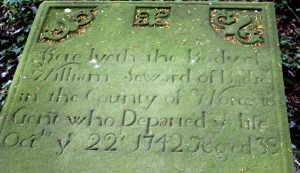 Strictly speaking, Cusop is just across the border in England, but its story relates to the death of  William Seward described above.

Seward was buried at St Mary's church, Cusop (HR3 5RQ).  To find it, we take a very narrow road from Hay, signposted to Cusop Dingle.  In the churchyard are three or four massive spreading yew trees and beneath one of them lies Seward.  The gravestone bears the text For me to live is Christ, to die is gain.  The date of his death is given (wrongly) as 1742.  There is also a memorial plaque inside the church