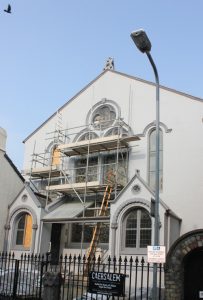 Following a long period of ministry in Anglesey, Christmas Evans, the one-eyed preacher, moved to Caerphilly in 1826 and thence to Cardiff in 1828.  He then returned to the region of his former ministry in 1832, but this time on the mainland side of the Menai Strait.  He served at Caersalem Chapel in Garnon Street (LL55 2RB), near the Castle Square for the rest of his life. The chapel had a small membership and was in considerable debt when he arrived and he was obliged to combine preaching tours with fund-raising.  It was on one of these missions that he died at Swansea in 1838.

The present chapel, grey-painted with iron railings, was rebuilt in 1855 in a more ornate Victorian style.  It has recently been undergoing further restoration and was covered in scaffolding when we called. 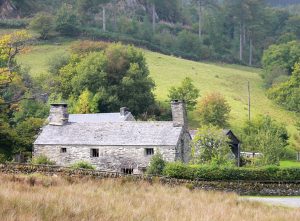 William Morgan (1545-1604), scholar, bishop and Bible translator was born at Ty Mawr Wybrnant in this parish (LL25 0HJ).  This remote farmhouse is one of two stone cottages lying either side of a clear mountain stream.  It is set in idyllic surroundings within the Snowdonia National Park, about three miles west of Penmachno, along narrow roads mainly used by mountain bikers and pony trekkers. The site is maintained by the National Trust, so fortunately well signposted, with Morgan's birthplace now a museum and the other cottage providing accommodation for the curator.

At the time of Morgan's birth the area was probably more thickly populated than it is today.  It was on a main drovers road for hill farmers taking their flocks and herds to markets in the English midlands or even London. Morgan's father was a tenant of the Wynn family of Gwydyr Castle and Morgan probably received his early education from the chaplain at the castle, who taught the sons of the family together with other pupils from the local community. The Castle, at Llanrwst on the road to Conway, can be visited but has little relating to Morgan's life. 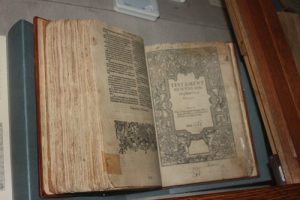 The simple stone building with its slanted chimney was inhabited until the 1970s, apparently without running water or electricity, but was acquired by the National Trust and, after much restoration, opened as a museum in 1988, to commemorate the 400th anniversary of Morgan's Welsh translation of the Bible. This was ordered by Queen Elizabeth I, and Morgan was appointed to the task, which took him nine years.  The Bible was printed in London but since the printers did not know Welsh, the proofs had to be sent back to him for correction, which took a further two years.  One thousand copies of the first edition were printed, of which some 20 survive, two of which are in the collection here.  Morgan's work in effect standardised and saved the Welsh language.  Since the wars of Edward I in the thirteenth century, Welsh had not been used in documents for government or taxation, so had broken up into numerous local dialects, but the Bible text gave it the standard form still in use today. See www.nationaltrust.org.uk/ty-mawr-wybrnant. 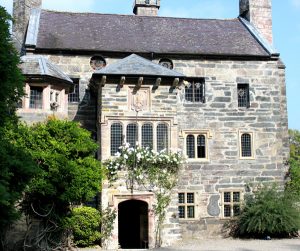 Gwydyr Castle, ancestral home of the Wynn family, stands close to this small town on the A470 to Conwy (LL26 0PN).  It was here that William Morgan came for his early education from the Wynn family chaplain, who taught the sons of the family together with other pupils from the community.

The castle is open to the public, but has little directly relating to William Morgan's time here.