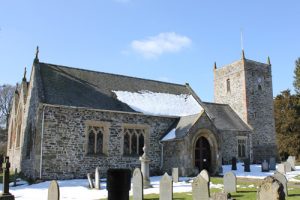 From 1578 until his appointment as Bishop of Llandaff in 1595, William Morgan (1545-1604) was vicar of St Dogfan's church in this charming village just across the border from Montgomeryshire.  While here, He was asked by Queen Elizabeth I to translate the Bible into Welsh, so it would be available to all the people in their own language.  The New Testament had been translated by William Salesbury in 1567, so Morgan, a scholar of Hebrew, Greek and Aramaic, undertook a translation of the Old Testament together with a revision of Salesbury's New Testament, publishing the full Bible in 1588.  Morgan's Bible helped to define and unify the Welsh language, which at the time was in the form of many local and mutually unintelligible dialects. 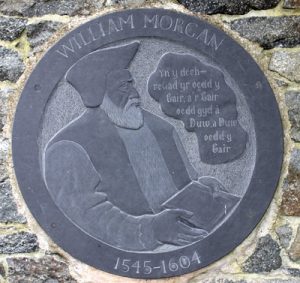 The church is proud of its role as the birthplace of the Welsh Bible.  There are slate roundels with a relief portrait of Morgan and inscriptions in English and Welsh on the wall at the entrance to the churchyard.  Inside, the church has a nave with no separate aisles, and when it meets the transepts, the forward facing pews are extended into the transept on one side, making very long benches.  There are display cases with early copies of the Welsh Bible, but these are not first editions.  Within the altar rail is a brass memorial plaque to Morgan.

In the centre of the village, set deep in rural Denbighshire, is a monument featuring a bronze statue of a Welsh maiden and the names of several distinguished people born here or associated with the area.  One is William Salesbury (c1520-c1584), a prolific writer and Renaissance man of the Tudor period. 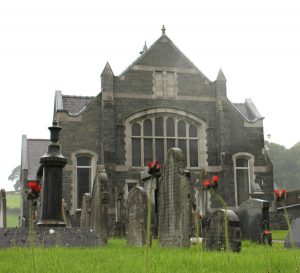 Salesbury attended Oxford University, studying Hebrew, Greek and Latin, and became familiar with the writings of Martin Luther and William Tyndale.  Following their lead, he saw the need for every nation to have the scriptures in their own language and in due course became a convinced Protestant.  Lying low during the reign of Queen Mary (1553-58), probably at Llanrwst, he later cooperated with others to translate the New Testament and the Book of Common Prayer into Welsh, laying the foundation for William Morgan's complete translation of the Bible.

Two brothers, Henry Rees (1798-1869) and William Rees (1802-1883) were also born here.  Both became preachers, Henry as a Calvinistic Methodist and William as an Independent, and both have memorial chapels in the village.  The Henry Rees Memorial Chapel is still in use for worship, while William's chapel appears to have been converted to a private dwelling.  Today William is best remembered for the English translation of his hymn, which became the virtual anthem of the Welsh Revival of 1904-05: